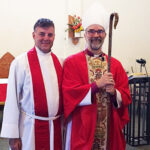 The Rt. Reverend George Sumner became elected as the Episcopal Diocese of Dallas’ 7th Bishop during a special election in May 2015. He oversees the administrative needs throughout the diocese. Most importantly, he is the chief pastor for more than 31,000 Episcopalians, 200 clergy, and 100 congregations, schools, and institutions.

Prior to his election, Bishop Sumner served as principal of Wycliffe College in Toronto, Canada. He was the dean of a growing seminary, and as a result, was the chief administrator responsible for strategic planning. Our Bishop encourages the young, future Episcopal priests, stewardship, relations with Bishops, and oversees the clergy’s continuing education.

The Rt. Reverend Sumner became ordained as an Episcopal priest in western Massachusetts in 1981 and served in a variety of capacities: youth minister, missionary teacher in East Africa, curate in an inner-city Anglo-Catholic parish, vicar on a native American reservation in New Mexico and Arizona, and rector in a small town. Our Bishop has a Ph.D. in theology from Yale and wrote a book about priestly callings and commentary on Daniel. He also has a Masters of Divinity from Yale Divinity School and a B.A. from Harvard College. Dr. Sumner is affiliated with the Anglican Communion Institute, a conservative think tank.

Bishop Sumner and his wife, Stephanie, have two children.