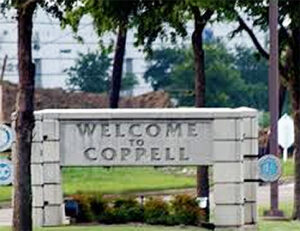 Church of the Apostles, an Episcopal Church, in Coppell, TX thanks all of our parishioners who come to pray & worship with us from the many cities in North Texas each week.

The Coppell area was settled by German and French immigrants in the 1840s. Members of the Peters Colony also settled here in the 1840s. Originally named Gibbs Station, after Barnett Gibbs (one of Texas’s first lieutenant governors), the town was renamed in 1892 for George Coppell, a wealthy English financier who came to the United States in the 1880s.

Spurred by the opening of Dallas/Fort Worth International Airport in 1974, the city was radically transformed from a tiny farming village to a large, upper-middle-class suburban community in the 1980s and 1990s. By 2000, almost all of the residentially zoned land in the city was developed, and the population grew to over 35,000. In addition to suburban homes, the city has a growing commercial base of warehouses and transportation centers on the south and west sides of the city, closest in proximity to the airport.

Coppell’s economy relies largely on its proximity to DFW Airport, which is directly to its southwest and accessible by multiple highways and surface routes. As such, many corporations have shipping and distribution facilities in a large commercial zone comprising the southwestern section of the city — among them, Amazon, Lucent, Container Store, and Mohawk Industries. In March 2010, Samsung opened a new cell phone manufacturing and distribution facility in the city.

All of the elementary schools in the Coppell Independent School District are rated “Exemplary” by the Texas Education Agency (in 2008), as are Coppell Middle School North and Middle School East. The district as a whole is rated “Recognized.”

Coppell High School’s news program, KCBY-TV, has won several national awards for its work with video production. New Tech High @ Coppell’s film program, NT Fuze, has had several of its productions accepted to major film festivals, including South by South West and the Dallas International Film Festival.  Now in its fourth year, NT Fuze produces quality content not only for New Tech and Coppell ISD, but local businesses and organizations.

We are deeply blessed with many members and we invite all Episcopalians and Christians in the Coppell, TX, area to join us.