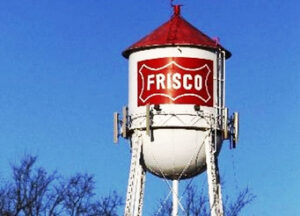 Church of the Apostles would like to thank those who come from Frisco, Texas, to worship with us.

On Aug. 13, 2013, the city and its Independent School District announced a partnership with the Dallas Cowboys, and therefore, established the city as the future home of the Cowboys world corporate headquarters and training location. The property contains multi-use special events and sports facility on about 20 acres. The Cowboys world corporate headquarters constitutes approximately 5 acres.

In February 2015, Frisco reported an estimated population of 145,900 and became one of the fastest-growing cities in the United States. It was also the fastest-growing city in the nation from 2000 to 2009. In the late 1990s, the northern Dallas and Fort Worth Metroplex suburban development tide hit the northern border of Plano and spilled into the city, making it a bedroom community of Dallas.

Since 2003, Frisco has received the designation, “Tree City USA,” by the National Arbor Day Foundation. Because of a 2007 Forbes study, the city that year became the seventh-fastest growing suburb in the United States. In 2011, CNN listed this wonderful city as one of the “Best Places to Live” in the nation.  Forbes ranked it 7th in its list of “America’s 25 Best Places To Move”.

Finally. we are deeply blessed with a great congregation, and we invite all Episcopalians and Christians in the Frisco, Texas, area to join us in worship.