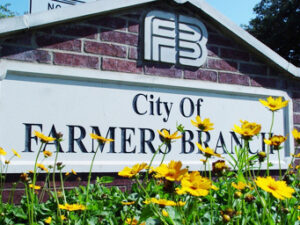 Farmers Branch, TX, located on Interstate Highway 35 and State Highway 77, twelve miles north of downtown Dallas. A suburb of Dallas, Farmers Branch is a short distance from the Church of the Apostles.   The Burlington Northern and Missouri, Kansas and Texas railroads serve the city.

The population of Farmers Branch remained stable until after World War II. In April 1946, the community incorporated and began to implement improved city services. In the next several years, the community completed a new artesian well, a water tower, and new water mains throughout the city.  Additionally, they created a city hall, a community house, a bag factory, a tile plant, and a woodworking and planing mill.  Also, twenty volunteer firemen built and manned the first fire station in the community. In 1956, the city received a home-rule charter that provides for a city council-manager form of government. At that time, an estimated 80 percent of the 800 residents commuted to work in Dallas.

The newspaper has been published since 1956, and the Metrocrest News was established in 1960. In the 1990s, Farmers Branch had a population of 24,250, sixty Fortune 500 companies, and fifty-two manufacturers, most recently including printing and publishing firms. Brookhaven Community College and Brookhaven Country Club are within the city limits. Finally, the Farmers Branch Historical Park comprises twenty-two acres and five historic buildings. Hence, in 2010, the city population had grown to 28,616.

In conclusion, we are deeply blessed with many members. We invite all Episcopalians and Christians in the Farmers Branch, TX, area to join us.